share
Human rights are being violated every day all around the world and many of those violations are driven by market’s demand and supply rule. We build interaction and awareness between those two parallel realities. Mutual contact broadens mind of young people giving them knowledge of alternative reality.
Demand and supply rule
​Many parts of our lives are driven by demand and supply rule known from global marketing. We are often not aware of fact that simplest and most common things are effect of complex and multistagial process which has it’s source in society and demand for it. The same rule is driving some of human rights violations. Human trafficking, illegal employment and prostitution, those are some of multiple issues which are on top priority list of organizations such as United Nations Human Rights or Worldwide Human Rights Movement. That problem do not apply to Tenancingo only, there are locations spread worldwide, where organized crime groups reacts for generated demand stated above. It is virtually impossible to come up with solution for one place only, due to strong connection between locations we have to aim globally. Fact that we are not aware of problem does not make us free of responsibility for making it happen.
Global acupuncture
​Creating communication line between places of supply and demand will encourage people to socialize and make friends worldwide as well as increase overall awareness of issues around the globe. There is no doubt that it will become new medium, public spaces will become place where we can contact with other side of the world. What is its biggest strength is natural way of catching young part of society. Therefore we can inform kids that there is alternative world where actions common in Tenancingo are absolutely stigmatized. In global scale we are coming up with structure , which can be implemented in various locations due to common feature which is street pole acting as an electrical installation, light solution or information holder.

Parallel realities
​This is penetration of two worlds, the real and digital one, which enriches reality. Presence of another culture in public space has immediate feedback on quality of these places. It fulfills events such as carnival, outdoor concerts or marketplace. This solution is aiming to avoid stigmatization of places like Tenancingo. It is easy to point out that it is the place where human trafficking happens, but we can’t forget that it is reaction to existing “demand”. Anyway, despite of issues, main function of proposed structure is creating the bound and dialog with various public spaces.
Project implementation
​We realized that public spaces such as square in Tenancingo are the best places for bringing our project to life. Those places naturally gathers people and offer wide set of functions and entertainment. Despite of apparent differences in structure among locations, their functionality remains the same. Acting as hosts of multiple functions they offer both entertainment and work place. That is why we encourage people to broaden number of activities performed in public space by adding another reason to go out of home. Interactive poles become construction for varied temporary architecture which can be build and moved by locals. Seamless fill of the space with them is going to allow it to be accepted all over the world.

Conventional media
​In XXI century we are suffering from two dimensional media. Data we are getting is post produced and cut out of many important facts product. We have been declined from interaction. True way of being properly informed is getting the information from the source. That is why we are emphasizing interaction and direct contact. Places generated by urban pole gird would carry holographic information captured both by thermal camera and 360 degrees camera. Holographic projection is a complete and direct form of sending three dimensional data in realtime. Moreover holographic projection allows us to carry more data than conventional image.
Program
​Our structure can be implemented without border limits. Due to that fact we can adapt program to variety of needs, grid is virtual space division which expands and shrinks as we are shaping space with urban furniture. Nonetheless all of specified functions can be fruitfully introduced without sacrificing existing local context. Education is straightforward connected with interaction, fact that we interact with people around the world gives us alternative view. Function of marketplace is going to be divided by grid, stands can be organized between them and heads of poles may carry lightweight material shading. Events such as carnival where square should be able to accommodate big amount of people are not going to be restricted by volumetric architecture, we remained all of the given plot surface. 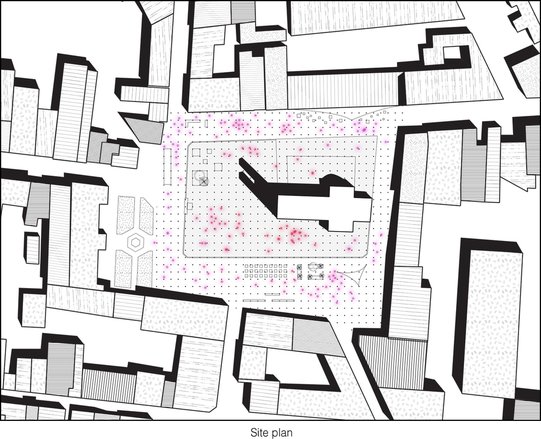 Urban pole
​It all comes to life at the number of 4. Four poles can generate and project holographic information. To fully use potential of holographic projection we connected 360 cameras with thermal sensing cameras. It allows us to track both person image and their body temperatures. On the sound engineering side we have s ystems of speakers and microphones capturing sounds and playing it back. Pole consist of inner tube carrying electrical cables powering all the modules and outer shell made of stainless steel modular tubes which are resistant to acts of vandalism.
Increased safety
​Images of people with increased body temperatures will be highlighted with red color. That information is giving us information that they are stressed, we can’t determine what is source of that stress it might come from work, maybe family issues on the other hand it might be stress of a potential victim or offender. It is left for our concern if we would interact with those holograms or we will avoid them. In first place it is raising safety in public spaces around the world, projection is generating a lot of light and will naturally lower percentage of crimes in public spaces. Secondly it is building interaction and dialog between people. That long term solution may have big impact on young people living in places of demand. They will get to know that there is another way to live their lives without violating human rights.
Mediascape
​It has no definition by now therefore we assume it shouldn’t be defined by borders or walls, we would like mediascapes to be working as wide as grid structure of poles would be implemented. Low level of invasiveness in public spaces translates to natural interaction, we are taking part in projection often not even being aware of that fact. Events such as marketplace, concert or carnival are being taken to another level with mix of reality and digital projection. Showing similar event from another culture enrich and broadens our horizons, we can become more conscious both in cultural and ethical way. We are aware that ignorance comes from lack of awareness, therefore we are simplifying interaction and seaminglessly incorporating it in public spaces.