​Massimiliano Orzi of Studio Orzi won the Overall Award in the 2018 HOME competition with his submission, "Integrated Apparatus." Arch Out Loud asked him a few questions to better understand the inspiration behind his design, and his thoughts on the importance of home.

Massimiliano Orzi (MO): Science fiction novels and films informed the project's narrative. Technological innovations such as robotics, AI, and 3D Printing inspired how the project operates. Rock formations and military bunkers inspired the aesthetic qualities of the project. I wanted to create somewhat mysterious objects, embracing the ambiguity between natural formations and artificial objects.​
AO: What are some of your favorite homes designed by other architects?

MO: I've always been fascinated by Frank Lloyd Wright's textile block houses, and the Samuel Novarro House. They have a strange scale, and I love they relate to the ground. That series of homes are timeless; they could be ancient or from a distant future. The Farnsworth House is probably my favorite of all modernist houses, and I love the Glass House as well.

​There are several great contemporary homes that are inspiring. The list can be long…​
AO: What was your design process for your project?

MO: I began the project by focusing on the issues I was interested in and developing a narrative, a scenario with a specific set of rules. Subsequently, I started working on the form and integrating all its spatial and functional aspects. I also designed the robots that would be used to produce these structures. Lastly, I worked on the representation of the project, such as the contour line drawings and getting the materiality of the rock-like objects right. ​
​AO: What do you find significant about designing a home?

MO: Some of the most important works of architecture are homes. Domestic architecture remains the typology with which we are most familiar and often start our practices as architects. When designing a home, you're confronted with a certain intimacy that other typologies lack, which makes them special. The design process is detail-oriented, given the scale and how it functions. The Home gives us an excellent opportunity to experiment with our ideas and produce novel architectural effects through theoretical and built work. Think of Le Corbusier's five points of architecture, Villa Savoye, and Maison Dom-Ino. 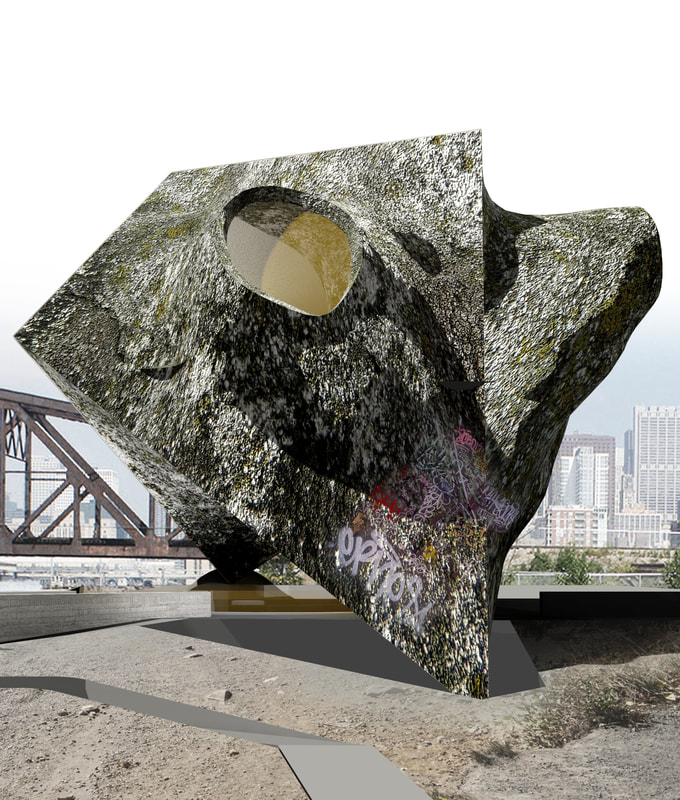 "Integrated Apparatus" by Massimiliano Orzi, Overall Winner in the 2018 HOME Competition
​
​AO: What do you think made your design proposal stand out?

MO: The project capitalizes on the dualities between technological utopia and its darker side. What made the proposal stand out was its critical approach and the way the project integrated different technologies.  I also think some of the project's formal qualities captured the attention of the Jury.
AO: What advice do you have for others designing homes?

MO: Design for adaptability and flexibility as the boundaries between living, working, physical and virtual are shifting. Research the users who will inhabit the space. It could be humans, animals, or perhaps robots. Try to use the project to influence issues facing the community or society in general. ​
​AO: Why do you think architecture competitions are important?

MO: I think one of the most powerful things about architecture is that it makes us imagine different worlds and scenarios. Competitions allow designers to challenge the status quo through experimentation and sharing ideas.
The proposal is a formal exploration of the continuous surface and the Poche’. Generally the ground floor only contains the hydro-power turbine and leaves the rest of the ground free. The first floor is dedicated to semi-public activities such as living room, cooking and dining. The second floor contains sleeping areas as well as working areas. ​
Studio Orzi is a multidisciplinary design studio focused on exploring the conceptual and aesthetic possibilities of architecture through built commissions and speculative work. They are interested in architecture as a cultural practice exploring history, technology, sustainability, form, and materials. The studio participated in several competitions in recent years. It has won the Home competition in 2018, Think-space Competition, and has been selected as a finalist for the Memorial De La Paix competition and the Cavin Fellowship in 2019 and 2014.

Massimiliano(Max) Orzi is the principal of Studio Orzi. He grew up in South Africa, Italy, and the United States and is currently living in New York City. Orzi holds an Advanced Architectural Design Degree from Columbia University, where he received the Lowenfish Memorial Award. Prior to Graduate school, he received his Bachelor in Architecture from California Polytechnic Pomona. He remains involved in academia, having been a visiting guest critic at several universities.

Before establishing Studio Orzi, he has worked for Reiser+ Umemoto/RUR, DOMAEN, and LLA, working on projects ranging from individual homes to large-scale cultural, educational, commercial, and infrastructural projects.

PROPOSE ​YOUR IDEAS AND GET FEATURED

JOIN ONE OF OUR CURRENT COMPETITIONS