​AN AO CONVERSATION  WITH BOJI HU,

​Boji Hu, a RIBA Charted Architect, won the Overall Award in the 2021 WARMING Competition with his submission, "Urban Sedimentology." Arch Out Loud asked him a few questions to better understand the inspiration behind his project and his thoughts on the impact architecture has on the environment.

Bojo Hu (BH): The project is primarily focused on the relationship between architecture and time. It is inspired by the current climate and resource condition as well as the work of Joseph Gandy, Auguste Choisy and Richard McGuire. By sourcing material from the city and densifying existing urban fragments as sedimentary layers, the project claims a geological approach to architecture, to terminate the cycle of demolition and rebuild. ​
AO: What do you think made your proposal stand out?

BH: The proposal has a dual nature. It is rooted in reality but transcends that by projecting itself into the future.

The project investigated an architectural approach that opposes excavation, demolition, expansion, and provokes reuse, re-purposing and the re-assembling of what we already have. It starts from the investigation and adaptation of the existing building of the Museum of London and then to the larger city.

In the end, the speculation about longevity sublimates the technical investigation and take the reader to the future. It is about an architecture of longevity and slow change, an architecture that always reconciles and accepts.
​​ 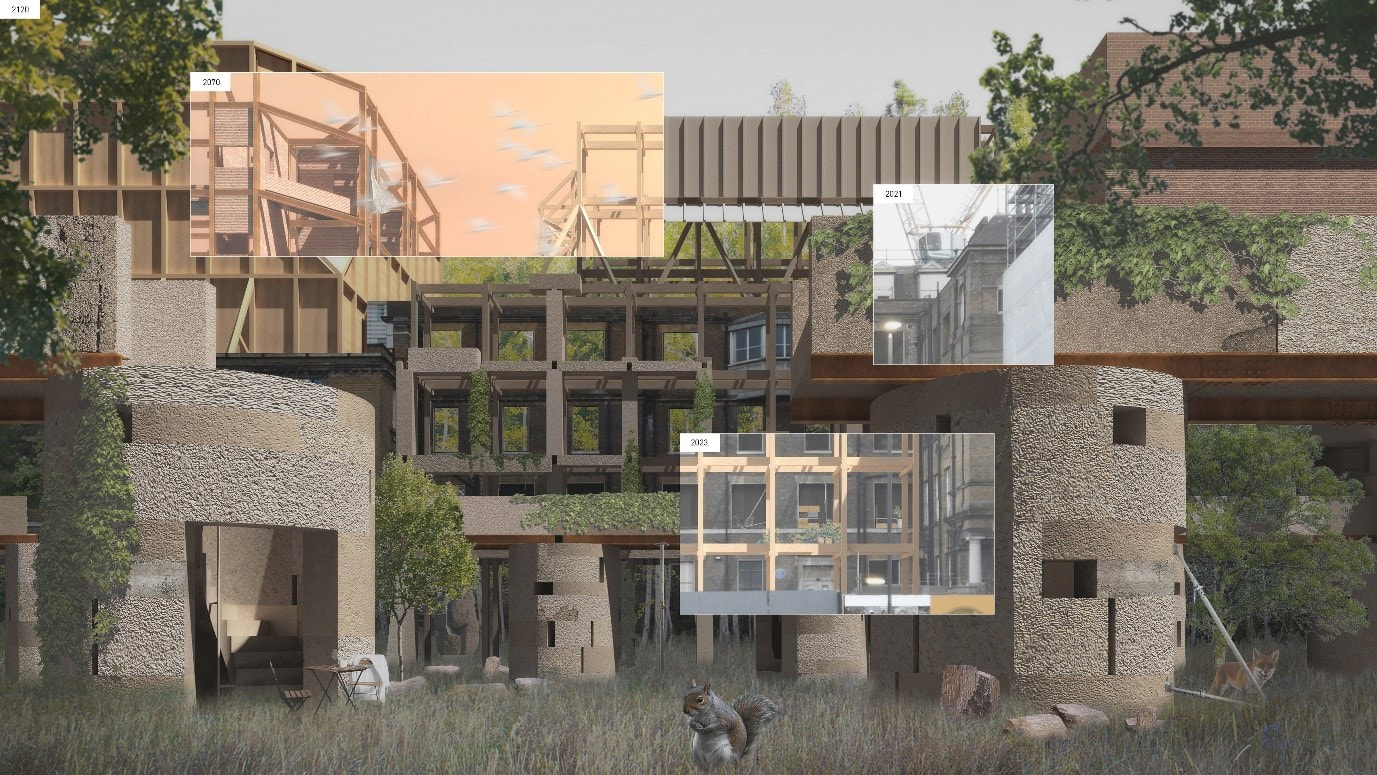 City as the quarry for sourcing material - Fragments, components and aggregates within the city should be re-evaluated and re-used
AO: What did you learn while working on the design for this competition?
​
BH: The catastrophic environmental consequence of the building industry.

While a piece of stone may take hundreds of millions of years to form under compression and heat, its lifespan as a building material is relatively short. After greedy excavations to the source material, in the end, we produced a huge amount of construction and demolition waste, which is partly to be transported to the landfill. The building industry contributes 40% of the UK’s total carbon footprint and more than half of the waste stream in England.
​AO: What excites you about the challenges climate change presents to architecture?
​
BH: It provokes architects’ introspection on environmental consequences of every decision they made in the practice. It also intrigues our innovation on adaptive reuse. 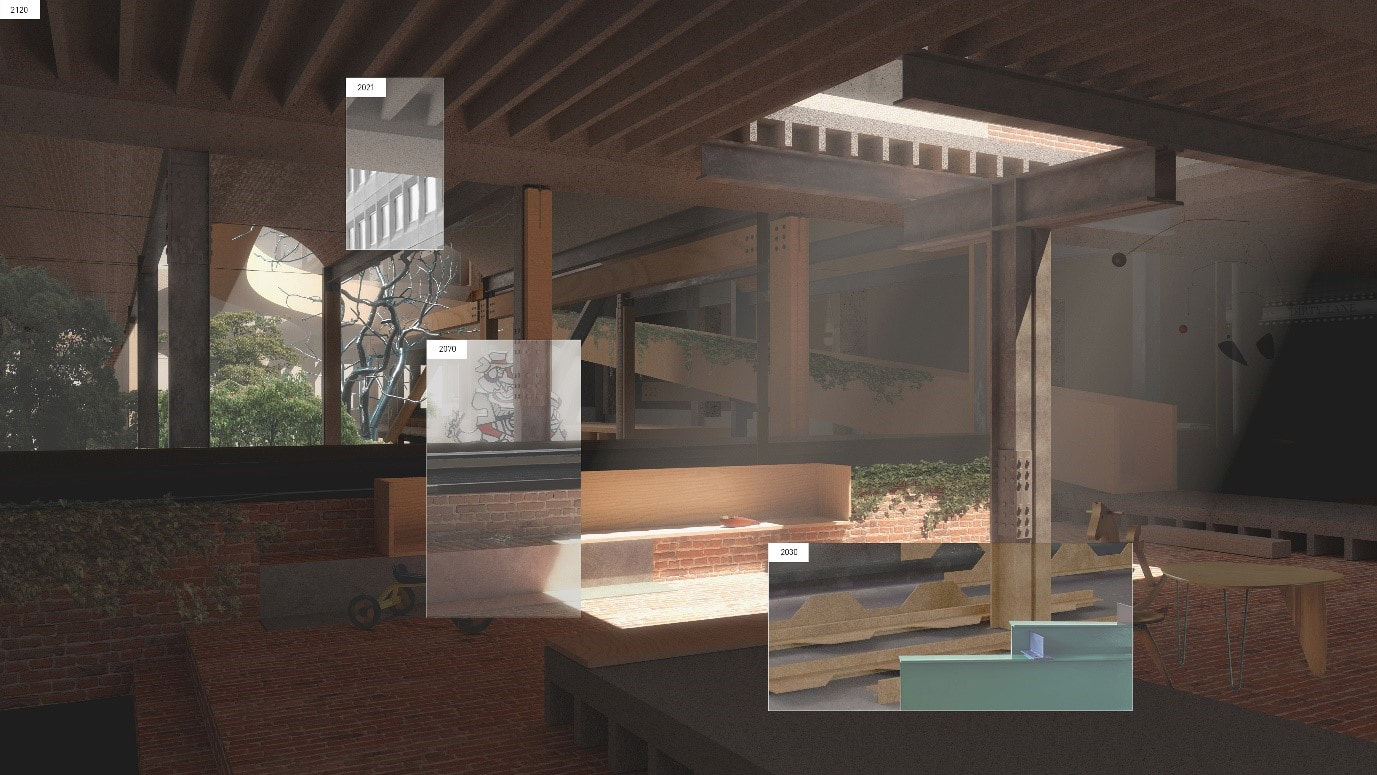 Carbon as a land-basis allowance - Saving three-quarters of carbon emission by reusing and repurposing the existing building​
​AO: How do you think that architecture can positively influence the environment moving forward?

BH: Architecture can be introduced as a resistant force against climate change by reflecting on the construction process within a geological time scale. We need to question the life cycle of urban artefacts and seek solutions to stimulate the pursuit of longevity.

A disassembled concrete element can be turned into a precast beam, then concrete blocks in the wall, later on, become the aggregates for a new piece. Despite its decaying process, we can always find a new place for it.

The existing system of material evaluation should be challenged. Fragments, components and aggregates within the city should be re-evaluated and re-used, complementing the palette for the urban bricolage, with their transformative forms throughout their life cycle into considerations.

As a palimpsest of historical layers, the city can be always densified without wiping out the existing. Throughout time, layers and layers of accretions accumulate on the topography of the existing structure, adapting them to the ever-changing demands of human life. The financial waste inherent in the cycle of demolition and rebuilding should be avoided.  This saving is recycled into more affordable places to live and more generous spaces in which to work. Spaces that are shared by the community are valued and are never lost or desecrated.
AO: What was your favorite part about designing for the WARMING Competition?

BH: The openness of the brief offers vast opportunities to respond to the climate challenge in any scale, on any site.​
​AO: Aside from the monetary prize, how have you benefited from participating in this competition?

BH: It draws my attention to existing buildings in the city. The project started from the current site of the Museum of London, where public discussions on its redevelopment took place. The current proposal diminishes the value of the current building and also ignores the carbon emission that may cost throughout the demolition and rebuild.

It was also a great opportunity to learn from other participants.
Architecture as a sedimentary process - Redevelopment of the existing building of the Museum of London
Boji Hu is an RIBA Charted Architect, with a strong interest in heritage buildings and reuse. Graduated from the AA diploma, he was awarded Brian Henderson Prize, Environmental and Technical Studies Prize and the Architectural Drawing Prize. Boji worked as an associate in OPEN Architecture, Beijing, and is currently working in Rogers Stirk Harbour + Partners, London. ​