IS TO BE ABLE TO


​AN AO CONVERSATION  WITH ANTOINE CHAIGNON,

​Antoine Chaignon, a graduate of the National School of Architecture of Versailles, won the Overall Award in the 2020 WARMING Competition with his submission, "The Industrial System Tower." Arch Out Loud asked him a few questions to learn more about his project and his thoughts on the future impact of architecture on climate change.

Antoine Chaignon (AC): I was impressed by Suren Erkman’s book Vers une écologie industrielle which questions us about the relationship between industrial flows and their possible interconnectivity or by Richard Fleischer’s dysto-pian film Soylent Green. My graphic universe was tinged with films such as Blade Runner or Metropolis.
AO: What do you think made your proposal stand out?

AC: The idea of this project is to create a hyper-productive building feeding on the residual flows of our ​​society: waste. That is to say, to consider the sustainable in a hyper-industrial society without denying the overconsumption and the overproduction which are inherent to it. This project can be perceived as a provocation but it is a simple mirror of our society exposing certain ideological contradictions. In this, my proposal was perhaps on the fringes of the ideas that push for degrowth.
​​ 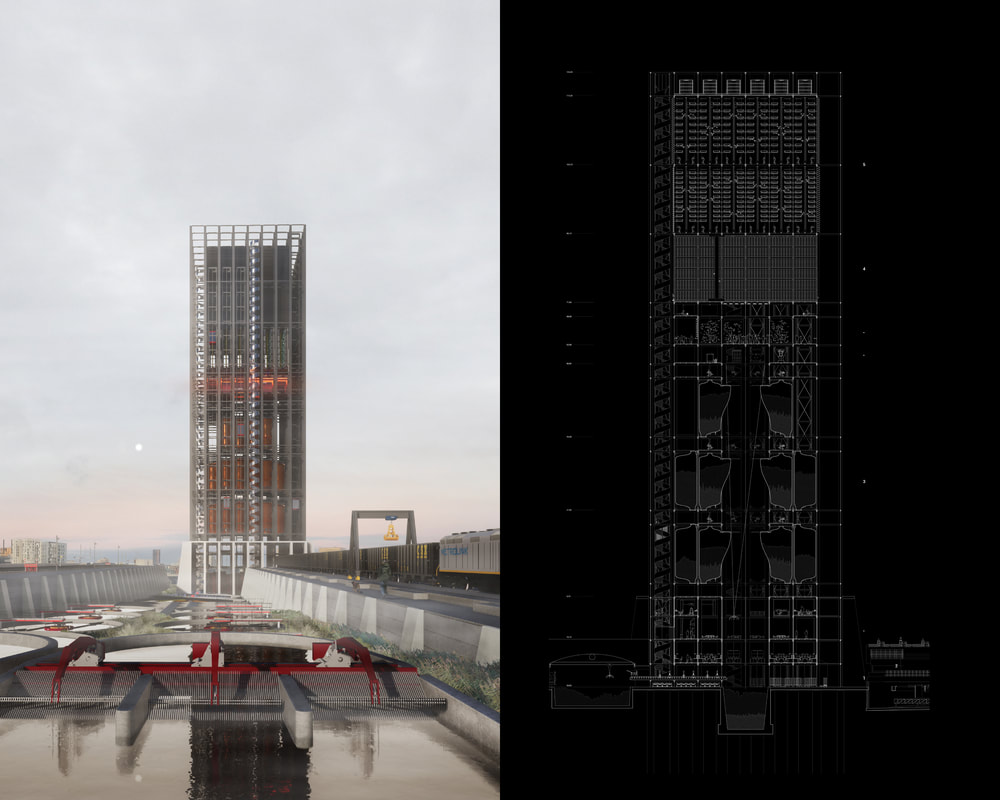 Located at the meeting point of the Seine and the railway tracks of the Gare de Lyon, the building develops into a raw vertical infrastructure that echoes the urban density which is facing Paris.
AO: What did you learn while working on the design for this competition?
​
AC: I learned to expand my toolbox. When I was stuck for ideas, I looked for inspiration from adjacent design fields. The reading of books about ecology or intensive industry led me to a whole new world of techniques and inspirations.
​AO: What excites you about the challenges climate change presents to architecture?
​
AC: The vast majority of tomorrow’s buildings are already there. I think the challenge is to be able to transform rather than demolish. It is not only a question of technical renovation consisting in isolating buildings but rather of giving them real added value while creating new uses.
​AO: How do you think that architecture can positively influence the environment moving forward?

AC: I sincerely believe that architecture can have a positive impact on climate change, but certainly not as it is too often presented to us, thinking that it is by planting trees on buildings or by adding excessive technology to them. We should return to a certain local architectural tradition: choose the right materials, the right construction system, the right proportions and not go into a standardization of the building disconnected from its territory. The technique could be concentrated in the production buildings, real organs of our cities, and in their possible connections. 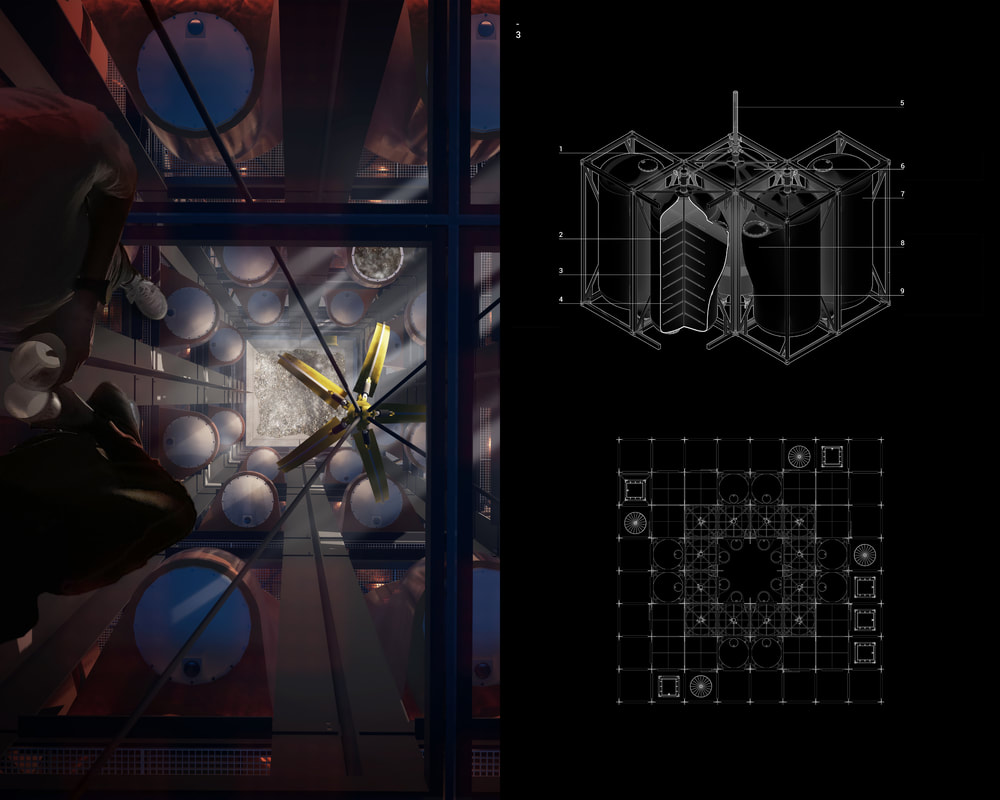 The different machines inserted into the structure, like methanization tanks or fish tanks, serve as a backdrop to a nightclub perched 60 meters away above the waste.​
AO: What was your favorite part about designing for the WARMING Competition?

AC: Rendering work is a part of the design process of great interest to me. I was aware that in a virtual com-petition the images would be decisive elements in building the narrative of the project.
​AO: Aside from the monetary prize, how have you benefited from participating in this competition?

AC: This competition brought me several publications in architectural media such as Archdaily, Bustler or Archinect.
AO: What advice do you have for people participating in competitions?

AC: The advice that comes to my mind may not be the most original, but I truly believe in it. I think you have to detach yourself from what can potentially be expected of you to create a project engraved with a strong personal conviction.
The IST adapts to the consumption model while refuting the ways of producing.
After graduating from the National School of Architecture of Versailles in 2020, Antoine Chaignon joined a Parisian architecture agency where he works on refurbishment projects. He is currently working on a 18th century factory transformed into a carpentry.