A CRYSTALLINE FUNERAL
RUNNER UP

share
How can an isolated landmark reveal itself as a coffin to seal the radioactive nuclear wastes, and how can the crystalline funeral, reveal and warn the considerable influence of human power to the future generation throughout the 10,000 duration of decay of nuclear substance, and probably, the human being as well?

​Salt crystal, which constantly seals the nuclear substance underground, will be regarded as a metaphoric connection between the funerals on the ground and the ones under it. Extra salt crystals in or around the site will be collected to build series of crystalline coffins, to seal the extinct species, one for each year, an ongoing funeral which lasts for 10,000 years, when the central church seals the last human being… 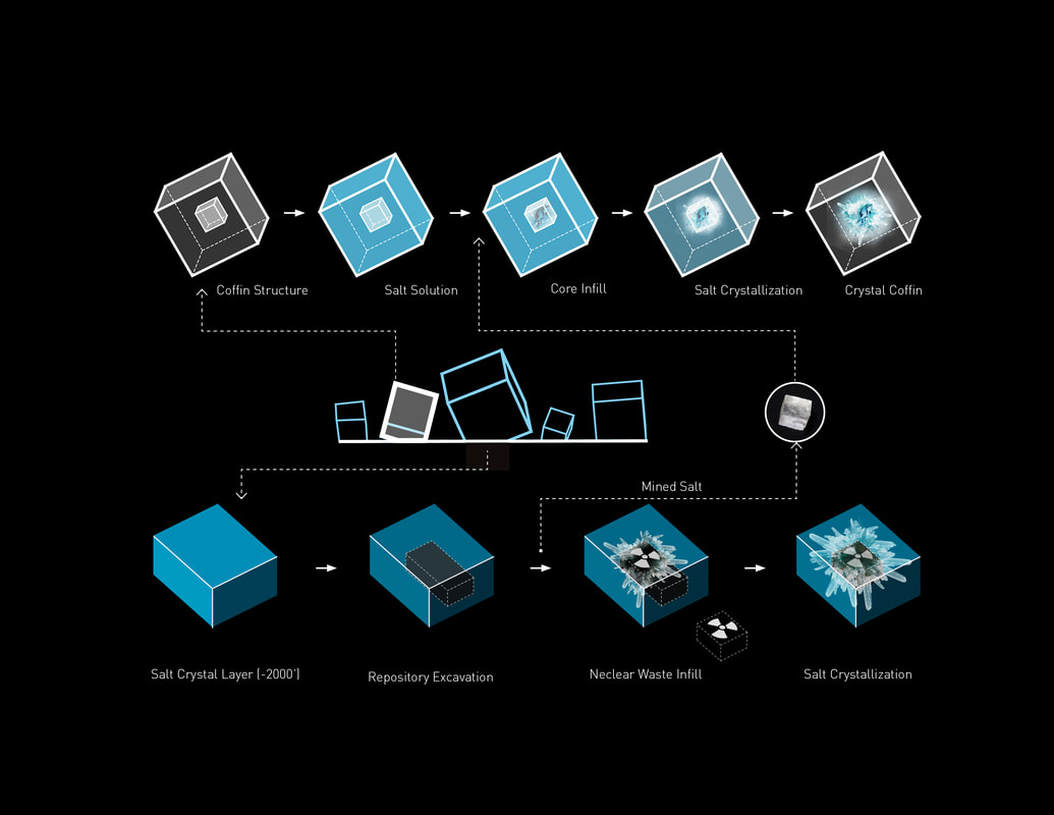 Technologies and Processes
EVAPORATION PONDS
Brine extraction in the Salado formation is instrumentalized to prevent known geologic and geohydrologic processes from taking place that might breach the integrity of the Waste Isolation Pilot Plant and Repository (WIPP).  These threatening processes include the potential dissolution of Salado salt necessary to collapse and seal the Repository and the inadvertent flow of pressurized brine into the Repository.  To control these unwanted possibilities, wells are drilled at point locations to pump brine and groundwater up and out of the Salado formation and into Evaporation Ponds, similar in configuration to nearby potash mines. (“WIPP-Related Geological Issues,” New Mexico Geological Society)

DIRECT AIR CAPTURE FARMS
This emerging building-scale carbon management technology is aggregated on the site to capture carbon dioxide from atmospheric air, much like an artificial tree.  As a stand-alone system it uses binding chemicals to filter carbon dioxide from the air, which in its purified state can then be sequestered into adjacent geologic formations on the site. (Global Thermostat)

IN SITU GEOLOGIC CARBON SEQUESTRATION
Extracted carbon dioxide from the nearby Direct Air Capture Farms and elsewhere is compressed into a fluid state and carefully injected deep underground into permeable geologic strata, such as the limestone in the Brushy Canyon formation.  This injected carbon dioxide is then trapped and sealed by impermeable overlain formations, thereby secured within the deep geologic formation and prevented from entering the atmosphere as a greenhouse gas. (“The Concept of Geologic Carbon Sequestration,” United States Geological Survey)

EX SITU MINERAL SEQUESTRATION - OLIVINE
Olivine, a naturally occurring and abundant mineral, reacts with carbon dioxide to form inert and solid carbonate minerals (magnesite) that store carbon dioxide.  Given sufficient testing, storage of carbon dioxide in these carbonate minerals could potentially become a safer and more easily monitored alternative to in situ geologic carbon sequestration. To carry out such tests, olivine-rich rocks are quarried and transported to the Testbed where they are agitated with salt and brine water, which transport carbon dioxide and catalyze the carbon sequestration process. (“Carbon Sequestration: Mineral Carbonation in Periodite for CO2 Capture and Storage,” Lamont-Doherty Earth Observatory)

EX SITU MINERAL SEQUESTRATION - BASALT
Basalt, similar to olivine, is also a naturally occurring and abundant mineral that reacts with carbon dioxide to form inert and solid carbonate minerals.  A porous volcanic rock, basalt contains olivine and feldspar and has a slower carbonation period than olivine.  Quarried basalt is transported to the Testbed, whereupon carbon dioxide is pumped into its porous cavities, slowly creating solid carbonate minerals, like calcite, capable of capturing and storing the gas. (“Carbon Sequestration: Mineral Carbonation in Periodite for CO2 Capture and Storage,” Lamont-Doherty Earth Observatory) 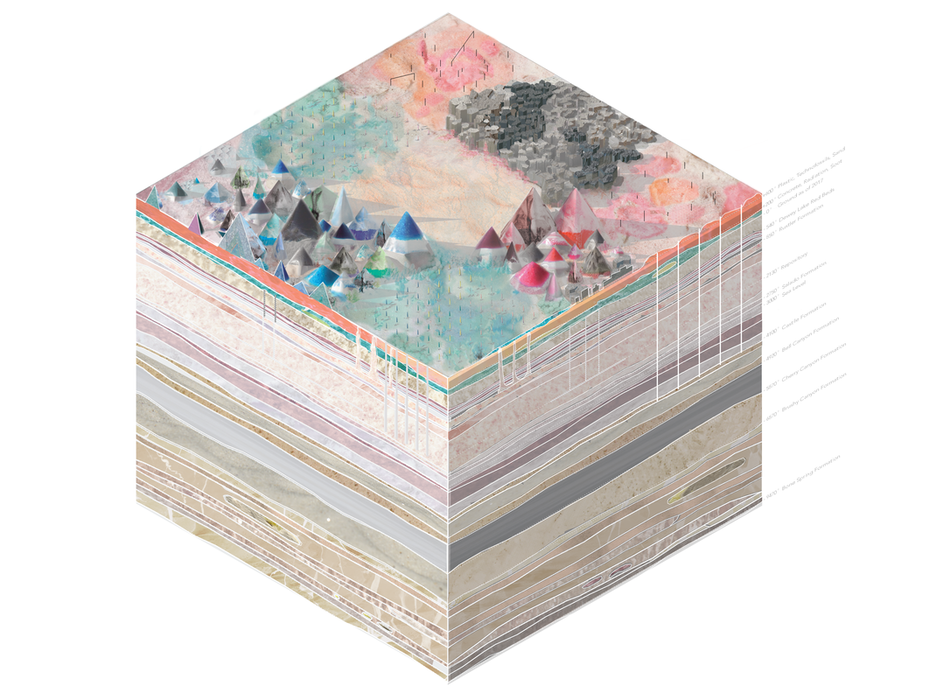 BIN YAN
Bin Yan is an architect and urban designer of Forum Studio, Clayco Inc., one of the top design-build Companies in the U.S. based in St. Louis and Chicago. He obtained his professional architecture degree in Shanghai Jiao Tong University, China, after which he further explored his inter-disciplinary research in the Dual-Degree Program of Landscape and Urbanism at Washington University in St. Louis with the highest Dean’s Scholarship.

Bin’s design practice goes beyond scale and nation. His recent projects including urban planning and office design for ENEA in Santiago, Chile; and a city-wide planning cooperation for the Amazon Headquarter Competition on behalf of the St Louis City. Also, he serves as a researcher for the Design Core Council of Clayco, where he experiments scripting and other avant-guard parametric design tools to optimize the design and BIM process of the team.

JIAHUI GUO
Jiahui Guo got her Bachelor degree of landscape architecture in Beijing Forestry University and is currently in her third-year of landscape master program at Washington University in St. Louis. Her second-year studio project redefined the relationship between quarries and landfills along Illinois and Michigan canal and won the 2017 student honor award of St. Louis ASLA Chapter. In Summer 2017, she worked as student intern at Turenscape, her job including digital model making, planting design and infrastructure design.